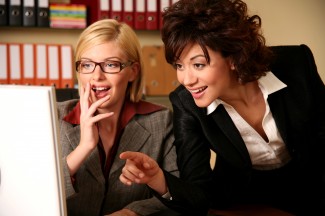 The fact that we live and work in a global economy today has changed the way we communicate. Much communication takes place electronically; you must have seen the parodies – two girls sitting in the same room and emailing each other to chat? In such a small world, employees in one company may also come from nations dotted all over the world. The internet has allowed “work without borders”, but not only that; since the Cold War is over, the Berlin Wall came tumbling down and China is no longer considered to be the “Yellow Peril”, people could also be said to be travelling further to work.

While most countries do speak English, which is the globally accepted ‘business’ language, the big challenges are still language as well as cultural differences. Some countries are also behind others in their English teaching and understanding of diverse cultures. A good example is India, where English is not a problem, but cultures clash. China is teaching English, but the language is not yet developed sufficiently, and there are significant cultural differences. In the USA traditionally, immigrants have always made up a large percentage of the work-force, and outsourcing is a popular way of getting things done today in a more economically viable way.

In order to ensure that contributions from people of diverse backgrounds are not buried under the confusion of cultural differences and language barriers, it is vital to improve communication skills. Employees, freelancers and outsourced personnel have a wealth of expertise to share, and their contributions across all industries is expanding exponentially. To tap into this expertise effectively; effective communication is key.

Different cultures receive information differently, so, analyzing the audience will offer clues on communicating messages. There are some cultures that don’t trust management to communicate an instruction for example, and they prefer to receive this from a leader at their own level; for example on the shop floor – perhaps a shop stewards or other peer.

An example would be that some employees don’t appreciate having their work praised in public, while others do. If we think about the Pol Pot terror and genocide in Cambodia, where the Khmer Rouge encouraged the extermination of millions of so-called bourgeoisies, and the wide-spread practice of ‘ratting on’ one-another. One can understand why a Cambodian employee might prefer to be praised in private.

The point is to initiate training in communication with international employees right from the very beginning, where understanding culture first, offers training personnel many clues. So, early and ongoing training, orientation sessions and being clear about expectations helps with the acculturation process. But while being accepting of some cultural nuances is important, this should not affect the culture of the business. Appropriate behavior can be customized within the existing company culture, but obviously the company cannot afford to lose its identity within a melting-pot of international cultural differences.

Heidrick & Struggles International agrees; that misconceptions regarding workplace demeanor can be avoided by communicating rules right from the beginning, starting at the interview stage. There should be no ambiguity about company policy and procedure, and communicating this clearly from the start, means that there will be less pain for all concerned later on down the line. By the same token, it is also vitally important to train non-foreign-born, employees too. They need to understand how significant diversity in the workplace can be. This training won’t go amiss, as it helps with client relations, and broadens the horizons and mindset of the person being trained.

Even foreign staff from English speaking countries experience culture shock. So, understanding even minor differences makes for more effective communication to ease into integration. Culture shock is real, and peer group mentorship with understanding can make huge difference to the way that diversity is dealt with. Just as professional skills development is important, so too is cultural and communication coaching.