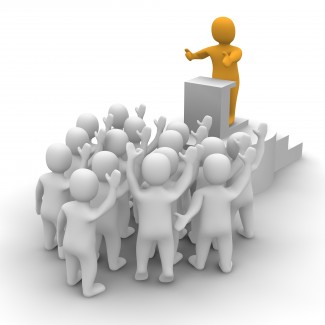 Rhetorical concepts are not only what ancient Greeks and Romans pontificated about in 384 B.C. or thereabouts. Rhetoric and style fits in beautifully with the effective communication tools that we use today. Broadly defined – rhetoric means – the art of effective communication, that’s basically it. And as ancient wisdom is well-known for its worth, when we study the art of communication it pays to read up on a little Aristotle, Plutarch, Plato, Homer, whatever happens to float your boat.

Essentially the art of rhetoric was taught in Ancient Greece and Rome, primarily so that ordinary citizens could plead their claims in court, hopefully without losing their heads, either physically or metaphorically. Teachers of the art were known as “Sophists” and they plied their trade from as far back as the 5th Century B.C. to the early Middle Ages. Sophist were criticized in the early days by philosophers such as Plato, but the concepts of Sophism and study of rhetoric became the keystone of a classical education.

Our modern concepts for both effective oral and written communication have more than their basic precepts written in rhetorical principles. They are heavily influenced by Isocrates and Aristotle in ancient Greece and Cicero and Quintilian of ancient Rome. Funnily enough, some of our modern concepts are also influenced by classic Homeric figures of speech.

Take this example from the immortal Homer Simpson ~ “English? Who needs that? I’m never going to England!”

Now there is some classic rhetoric for you. It may not be in the same league as Plato’s first mention when he visited Georgias, where he declared that the function of “oratory is in fact to influence men’s souls” and compares it to cookery. Springfield’s resident rhetorician gets the job done and doesn’t even need to be able to speak English to get his message across, he is a master of verbal irony.

‘Rhetoric’ ~ ‘oratory’; ‘potato’ ~ ‘potato’; for effective communication, Plato is correct; we have to be able to “influence men’s souls”. So the speaker or intending orator must know the different types of souls. What this means is that different types of people are subjective to different influences, so determining the type of discourse, for the type of soul – i.e. person or audience, is important for getting a message across. In other words a different type of listener is easier persuade with a different type of speech. Understanding this concept makes for a highly effective communication tool. So cultivating a keen perception and following up on this when we speak, is key for winning communication.

Isocrates, a contemporary of Plato, saw rhetoric as a powerful tool. He basically said – this is a free translation – that the human condition can be aided by people with the power to speak right and think right. He said this is the great and honorable thing about rhetoric when it is devoted to the common good and welfare of humanity. He also said that this power to “speak right and think right” would reward the speaker/thinker.

Aristotle may have been Plato’s most famous student, but he also had his own thoughts on, and developed rhetoric principles which remain influential today. When we learn about effective communications skills, it pays to go back in time and really understand where these principles evolved and how they apply to today’s situations. Not all that much has changed.

The etymology of the word rhetoric may be traced back to the simple Greek assertion ‘I say’ (eiro) so anything can conceivably fall within its domain. Basically the universal task of this form if eloquence is geared to persuasion, if the persuasion does not succeed then the aim of the rhetoric has not been achieved.

From Ulysses to the Idiot we then leave you with this pearl of wisdom – “http://www.anvari.org/fortune/Homer_Simpson/1040_the-code-of-the-schoolyard-marge-the-rules-that-teach-a-boy-how-to-be-a-man.html” The code of the schoolyard, Marge! The rules that teach a boy how to be a man! Let’s see; *counts on fingers* don’t tattle, always make fun of those different from you, never say anything unless you’re sure everyone feels exactly the same way you do…”